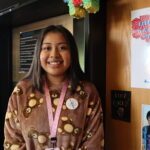 Magaly Aguayo wants to raise awareness about underreported natural disasters and bring attention to the ways that indigenous communities are disproportionately affected by natural disasters.

“In Mexico, their voices are always quieted down,” she said. “There’s a huge split between indigenous people and the ones that colonized.”

A magnitude 7.7 earthquake struck near La Placita de Morelos in western Mexico on September 19. Red Cross volunteers have reported damaged buildings and cracks in houses as well as a shaken population.

The disaster is personal to Aguayo, whose family was one of the many underrepresented indigenous victims of the earthquakes in Michoacan. This inspired her to look more into underreported natural disasters that have happened in recent history and why they’re often underreported and relief efforts underfunded.

Aguayo believes that more media coverage will significantly raise awareness of underrepresented victims and increase pressure on the government.

In Puerto Rico, the tourism-dependent economy is vulnerable to natural disasters. Puerto Rico’s Export Services Act (Act 20) and Individual Investors Act (Act 22), passed in 2012, continue to allow the U.S. commonwealth to be exploited by foreign investors and companies.

In an Oct. 21, 2020 press release, the Internal Revenue Service (IRS) promised to “vigorously pursue any individuals and professionals that fraudulently enrich themselves by abusing government tax incentive programs.”

Following these hurricanes,  Puerto Rico’s tourist locations are often rebuilt before the home of locals. Companies like PRoTechos are dedicated to rebuilding damaged roofs from Hurricane Maria but up to 80 percent of those roofs have not been durably repaired as of 2022.

Aguayo said, “These hotels, they claim that they care about the local indigenous community because they provide them with jobs and resources. But in reality, this isn’t enough to recover. They often mistreat workers, they don’t even provide them with rooms.”

When Hurricane Fiona hit, most of the residents still hasn’t recovered from Hurricane Maria, which occurred five years prior.

“As of August 2022…FEMA has obligated about $32.2 billion in funding for Public Assistance projects in response to hurricanes Irma and Maria. In turn, the governments of Puerto Rico and the USVI have expended approximately $7.7 billion of the Public Assistance obligations as of the same period,” stated the Government Accountability Office in August.

According to the 2022 FEMA statutory report, over 60% of the 1.1 million residents who applied for aid were rejected due to not having the required official documents (usually the property title to prove ownership).

The region’s infrastructure, especially hospitals which were severely needed during natural disasters, has barely recovered before hurricane Fiona took place.

As of Oct. 18, FEMA had found 88% of those applicants to be eligible for its Fiona-related assistance, according to Texas Appleseed, a non-profit organization in Austin, TX. But nearly all the approved applicants had received only $700 – the standard amount disbursed as FEMA’s Critical Needs Assistance, which is a one-time payment intended to cover minor expenses incurred amid temporary duress.

View all posts by Rachma Tsabitah